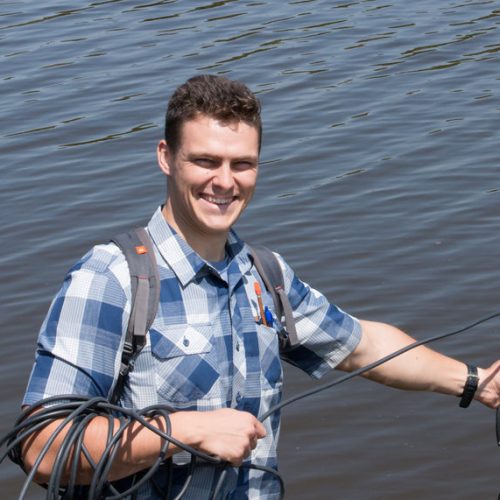 Tim’s path to becoming a hydrologist with Creek Lands Conservation probably started during one of his many camping trips. Camping so much began to blur the distinction between “nature” and everything else, and allowed his general interests in geology and biology to focus into hydrology and environmental policy. Like many who grow up along the Sacramento River, Tim ignored what was upstream or downstream of him, giving little thought to this precious resource until a California drought turned his green neighborhood to brown. The water scarcity narrowed his many broad interests into a powerful curiosity that propelled him to complete a B.S. in Environmental Management and Protection at Cal Poly in 2017, especially relishing courses in hydrology and geomorphology. Since earning his degree, his recreational passions — whether skiing down a mountain, foraging for mushrooms, or hiking along a river — have much more meaning. Now Tim installs sensors along creeks and in aquifers, and translates the data into maps and graphs to help other people transform old perspectives into new ones. Tim makes it a point to learn from people whose path is different from his: whether on their farms or in their offices, Californians all have their own perspectives on what we should do about our water.