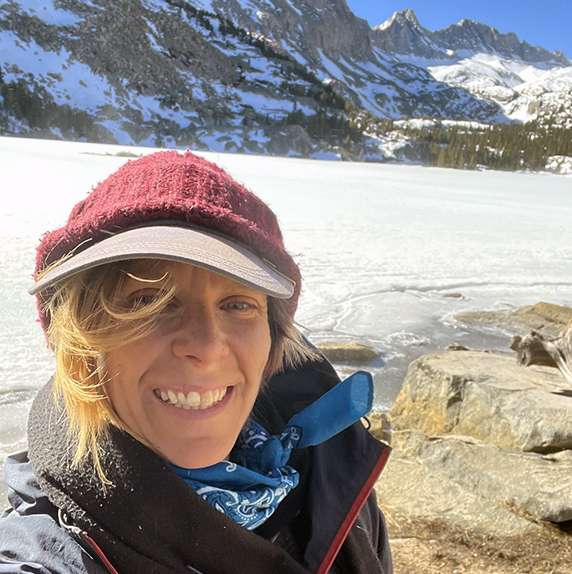 Growing up in rural upstate New York, she spent most of her childhood outside exploring the plentiful seeps, springs, streams, ravines, and fields in her backyard — usually with her younger siblings, at least one dog and maybe a horse in tow. In fact her family name Paludi means “of the swamp”. Water was plentiful, as were ticks, poison ivy, frogs, beaver, turtles, birds, and fish. After attending Union College with a BS in Biology and Chemistry, Jen migrated west to much drier pastures, with her calling to be part of a solution becoming more clear. She received her MS in Environmental Science and Management from the Bren School at UC Santa Barbara in 2008. She has a diversity of “pre-mom field work experience” including with California condors, carnivores, and rare and endangered plant species. When it was time to start a family, moving to San Luis Obispo County was a no-brainer and Los Osos became the birthplace of both her kids. The surrounding watersheds became equal parts work and play. Her work with the Morro Bay National Estuary Program and Coastal San Luis Resource Conservation District resulted in measurable on-ground and in-stream enhancements. She has worked with local agencies including the City of San Luis Obispo, Upper Salina-Las Tablas Resource Conservation District, and City Farm San Luis Obispo in grant writing and proposal development for major community enhancement projects.

After some years of coming to know intimately the lands and waters of the Central Coast, the mountains called to her. Although she spends most of her time at elevation in the Bishop Creek watershed, Jen continues to learn and be humbled by the Central Coast, where she returns often.

Through her work, she pays reverence “with her heart and brain” as an observer, reader, and witness of these important watersheds. Jen has a unique skill in telling the story of watersheds in a way that helps gets our work funded — and managed, permitted, and properly implemented. Her holistic watersheds view combined with systems-based, practical, and applied technical knowledge helps contribute to making things better.

With her free time, Jen enjoys mixed season adventuring with her two dogs, riding her mountain bike, and creating and sharing her art.