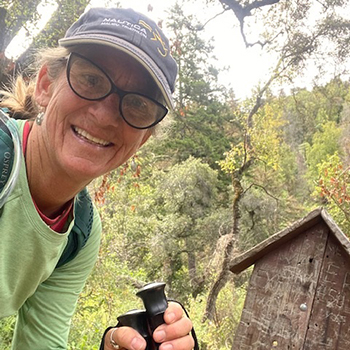 Andrea grew up in Colorado and spent much of her time in the Rocky Mountains, she attended Colorado State University and then in the late 1980’s, moved to the Central Coast and completed a Masters Degree at Cal Poly.

Retired in late 2021, Andrea worked for Port San Luis Harbor District as Harbor Manager for seven years, as well as taught at California Polytechnic State University as an adjunct professor. Prior to that she spent two years as the Executive Director of a newly formed, non-proﬁt organization instrumental in securing historic ﬁshing privileges to the Central Coast – the Morro Bay Community Quota Fund.

Andrea began her career with the City of Morro Bay, spending 27 years with that city, including 7 years as City Manager.
Andrea spends 85% of her day in the outdoors, either in, on or near the water.